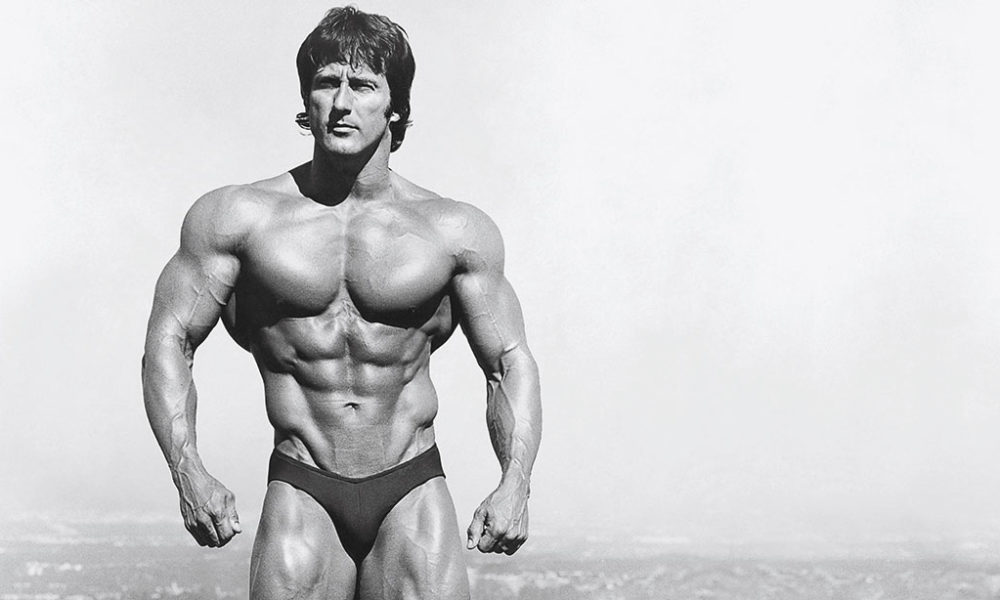 Retired professional bodybuilder, renowned performance coach, and author, Frank Zane, is one of the most popular athletes of all time.

Having numerous achievements to his name, Frank Zane has managed to leave an everlasting impression on many of America’s aspiring bodybuilders today.

Not only did the athlete win a large number of bodybuilding titles but he was also inducted into the world-famous IFBB Hall of Fame – a memorial established in 1999 in order to honor outstanding bodybuilders.

Furthermore, Frank Zane also managed to defeat one of the toughest people in bodybuilding history, Arnold Schwaggener. Ultimately causing him to become a star in the world of bodybuilding.

To achieve Frank’s phenomenal body symmetry and proportion is the ultimate goal for many bodybuilders. Therefore, it is of no surprise that Frank’s diet, lifestyle, and workout routine are such popular topics of interest.

We’ve compiled a free guide that can help you crack the code to find out the secrets behind Frank Zane’s impressive physique.

In this article, you will find the ins and outs of Frank’s life, workout regime, diet, fitness, and philosophies. You will also be discovering his unique approach to training as well as many other aspects which helped him build one of the greatest physiques the world has ever seen.

Frank started working out around the age of 14- 15 years old. When Frank turned fourteen he discovered fitness magazines which acted as his primary source of motivation.

He states that these magazines sparked his interest in bodybuilding and physique training. After constantly studying the magazine he started formulating his workout routine. His initial workouts were mainly composed of home-based training. Mainly because his local gym, at the time, lacked proper equipment.

He mostly trained in his basement, using adjustable dumbbells.

As for the frequency, Frank reports that he trained every day, if not, every other day. He targeted legs on one day and upper body on the next.

After seeing good results, Frank discovered physique competitions. When training for these competitions he even managed to reach his desired build that he had visualized in his mind.

Frank’s physique is highly admired amongst many. It is considered one of the most remarkable physiques in the legacy of bodybuilding. So much so that Zane is often rendered as one of the “poster boys” – ones that are popularly seen on gym walls. 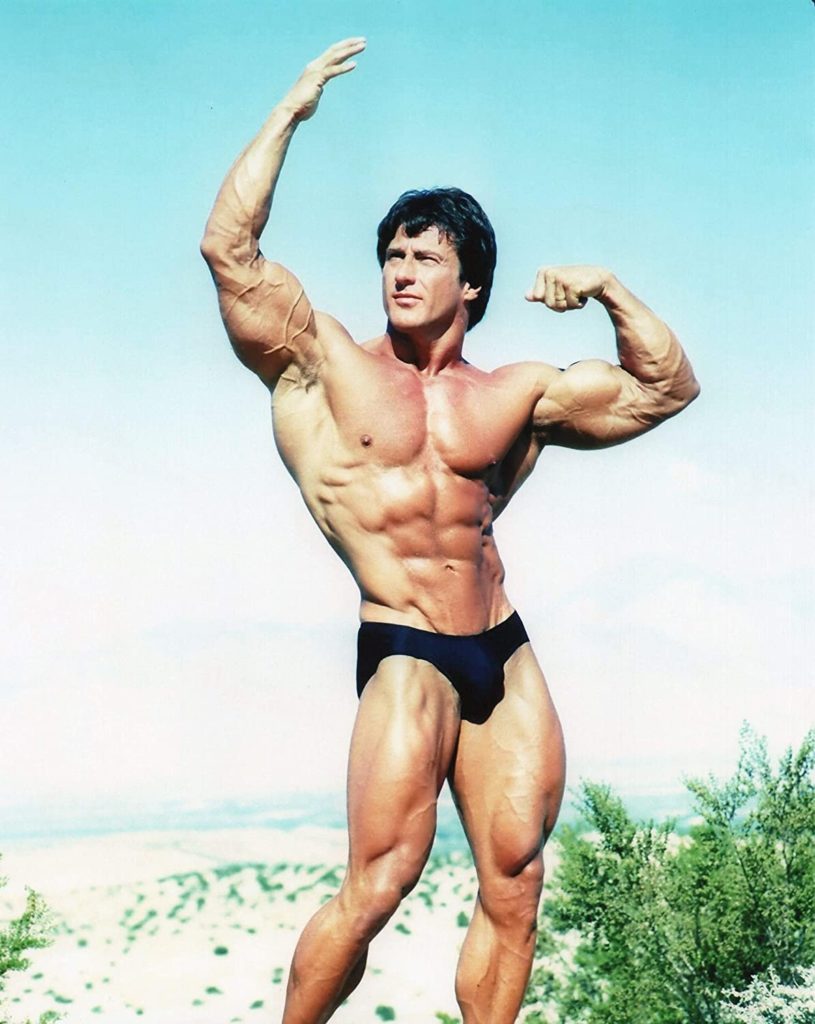 The famous Frank Zane Pose is composed of a modified front double biceps pose. His arms are extended above his head, showing off his muscle size and definition. His broad shoulders and thin waistline make for that stunning V taper that many trainees dream of.

Frank’s main focus lay in “splits” or split training – a popular weight training program that depends on sessions of body training. To put it briefly, this was composed of a 3-day program with rests in between. Each session was divided on the basis of body regions.

He also alternated between deadlifts, curls, and bench presses. However, he stopped doing these after realizing that his interest lies in physique training.

Generally, Frank Zane gave himself six months to reach top shape. He worked out 3 days in a row and trained hard throughout summer until competition came up. After this, he decreased the intensity and focused on maintenance training.

At the time of graduation, Frank gained 30 lbs and weighed a total of 185 lbs. This was the penultimate phase before his first victory. 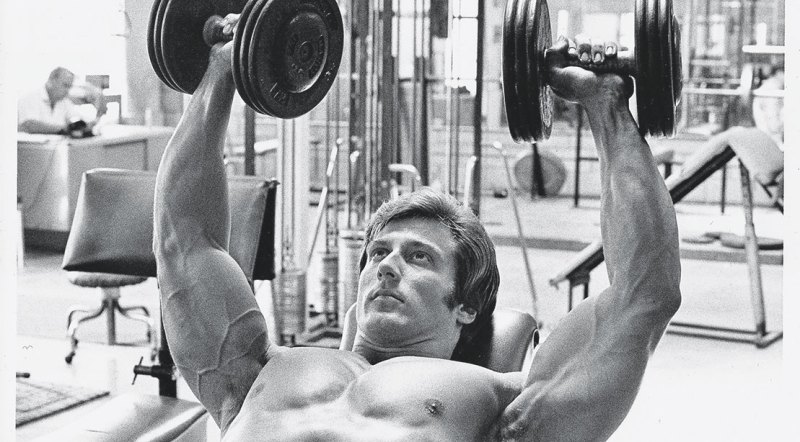 In order to pursue his goals, Frank moved to California. Around 1965 is when he won his first bodybuilding title by competing in the IFBB Mr. Universe competition. Before this, he had participated in various small contests.

After winning his first “Mr. Universe” title, Frank continued to participate in other contests. By 1968, Frank accumulated a total of 3 wins in both Mr. Universe and Mr. America. He also went on to win Mr. Olympia in 1977.

One of the most significant victories of Frank Zane has to be in 1968 when he won against Arnold Schwarzenegger. This was a notable achievement, particularly because Arnold was genetically advantaged and was superior to Frank in many aspects.

To begin with, Arnold’s form and muscularity were immaculate. Only three bodybuilders (including Frank Zane) have ever been able to beat him. In fact, even at the time of the competition, Arnold Schwarzenegger was 50lbs heavier than Frank Zane.

Regardless of this, Frank Zane was able to beat Arnold, successfully securing the title of Mr. Universe.

In the world of bodybuilding, it is not the “bulk” that matters, but it is the body definition or “quality” (as Frank Zane calls it), that trainees must aim to target. Thus, one must train according to what is appropriate for body definition and not just mindlessly “stack” on calories.

Even though Frank’s genes were not exactly supportive of his body goals, he still trained remarkably well and was set out as an exemplar after his win against Arnold Schwarzeneggar.

At the peak of his bodybuilding career, Frank Zane weighed around 185lbs at a height of 5’9”. He reports having always eaten a minimized carbohydrate diet, moderate fat, and a high protein diet.

Frank reports that bulking up was never his goal. He says it made him lose body definition and so he tried not to go beyond 5% of his competitive weight. As a result of this, he followed a fixed diet which can be summarized as the following:

For contests, he stayed within a 3000 calorie limit and ate foods like beef, chicken, tuna, and eggs. He avoided consuming dairy goods. For supplements, he used egg protein powders, amino acids, and multivitamins.

Not only do fitness enthusiasts admire Frank’s physique, but they also appreciate the insight that he offers. After gaining a credible reputation, Frank shared many of his secrets that he learned in his years’ worth of experience.

While most bodybuilding professionals emphasize the aspect of goal setting and sticking to what makes you look best, Frank approached his training a little differently. He mostly focused on aesthetics and mind training.

Here are some of his most notable philosophies and words of advice.

Zane remarks that “form” plays the most important role in muscle building. In other words, bodybuilders should focus on the right kind of movement and technique to efficiently strengthen muscles. He prioritized focusing on form over the number of pumps and weights.

Doing What Fits You

While it is evident that Zane did not have any “out of the world” genetics, he was still able to prosper in his field. This is because he was able to understand his body and its needs.

It is reported that he managed to build his world-famous shape with natural methods like training and diet control. He tried to stay lean and muscular instead of bulking up. He also avoided substances like steroids and drugs.

In an interview, Zane remarks

“You have to do things that have been tested and work for you”.

In simple terms, aspiring bodybuilders shouldn’t look up the first workout regime they find and follow it. Rather they should adjust their plan, use trial and error to find a method that gives them the most benefit.

Another important phenomenon Zane talks of is muscle isolation. He advises targeting one particular muscle and working strictly upon it.

That does not mean one should excessively use heavy weights to build it. That may result in injury and stress. When training a muscle one should aim to experience the pump.

“I mean really get the blood into the muscle, experience the pump” Zane says in an interview.

Furthermore, he also advises against targeting all large muscle groups at once and overtraining. Zane urges trainees to find their “balance”.

He states that a balance between volume and frequency is something trainees should experiment with and find out on their own.

In many of his interviews, Zane has admitted that he heavily relies on meditation. Apart from training, he says he spends most of his time meditating. As a result of his love for meditation, Zane managed to incorporate his meditative practices into training.

In technical terms, Zane emphasizes orienting full attention to the exercise movement one is attempting.

“When you’re performing a weight set, there is nothing else …. Don’t focus on anything but the sensation, not even the breathing. When you’ve advanced to a state where you are one with the set, your breathing will be in sync with the movement”

Zane would often lift weights lighter than his potential simply so that he could establish a better mind and muscle connection. It helped him gain a better focus on what he was doing and get better results.

What makes Frank Zane such a memorable athlete is his focus on mind work, positivity, and meditation. He emphasizes the idea of taking time and focusing on what benefits you best.

All in all, Frank Zane’s meticulous focus on proportion, diet, and peace of mind is what helped him build one of the greatest physiques the world has ever seen. You can find the Frank Zane experience in the Iron Man Spring 2021 Issue.