What is Iron Man Magazine?

Iron Man Magazine, America’s oldest fitness magazine in circulation, was founded in 1936 by Peary and Mabel Rader of Alliance, Nebraska. In the early 1950’s, Iron Man Magazine was the first weight-training publication to show women working out with weights as part of their overall fitness regimen. 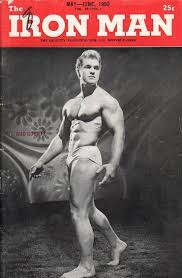 In 1986, the Raders sold the magazine to John Balik and Mike Neveux, who re-positioned the magazine as a hardcore bodybuilding publication. Iron Man started out as an educational vehicle to inform and enlighten those people who were interested in weightlifting, bodybuilding and eventually, powerlifting. The magazine has always stressed the health and character-building aspects of weight-training, and was always the leader in bringing exercise and nutrition concepts/ideas to those in the training world.  Iron Man Magazine licenses to countries all over the globe including Japan, Australia, Sweden, Norway, and Italy.

Begovic’s goal with the magazine was to make effective training and nutritional information accessible to everyone. “In a world where the Internet makes it confusing for people interested in fitness, Iron Man Magazine is the one place they can always turn to for credible information as well as up to date news, and the insiders’ look into the fitness industry.” He also liked to use it as a platform to launch new athletes into their fitness careers and provide opportunities for fitness enthusiasts to participate in a community where they could share ideas. Begovic’s vision for Iron Man Magazine was also to highlight other popular divisions such as Bikini and Men’s Physique in addition to traditional bodybuilding. Begovic planned a re-design of the magazine, a re-launch of the website with informational articles and videos, as well as other events centered on the core values of “inspiration, information, and transformation.” A shift in mindset came in 2018. Iron Man Magazine felt that the world was wanting truth. They wanted to provide motivation, information, training programs, nutrition advice, and supplementation protocols that readers could follow, knowing that if they put in the work, they could achieve the physique on the cover. In November of 2018-2019, the president of the largest Olympic-Level Tested Bodybuilding organization, Denny Kakos, and Doug Grant, founder of Optimal Health Systems purchased Iron Man Magazine. With the new ownership came a new direction for the magazine. Every athlete now featured in the magazine will be Olympic-Level Tested. The programs that you read in an athlete’s interview are the exact ones used by that athlete to achieve their physique without any hidden consumption of substances. In January of 2020, Denny Kakos then acquired full ownership of Iron Man Magazine.

Iron Man Magazine is not against those who choose not to train naturally, that is their prerogative.  In fact, there are many publications that celebrate those athletes that the population can follow if they choose.

Thousands of tested athletes will be featured with attainable physiques achieved by hard work and dedication so that much of the population can be inspired to sculpt their own bodies and feel confident that “everything” needed to accomplish it will be shown. Iron Man Magazine will also feature many outstanding, tested athletes with genetically-gifted physiques that will appease those wanting to see what pushing the genetic markers looks like.