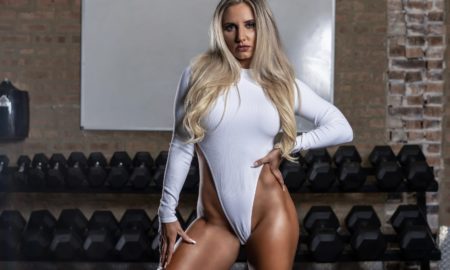 Quick Guide On How To Become A Fitness Influencer Could A Plant-Based Diet Be Right for Me? Want to train like the UFC middleweight champion fighter Israel Adesanya? Or want to get a ripped physique like The Last Stylebender? You are at the right place.

Evolve Mixed Martial Arts gym’s Israel Adesanya is arguably the hottest star in the UFC and is the current UFC Middleweight Champion. His ability to throw out some of the most beautiful and exciting strikings we’ve ever seen has earned him a large fan base.

Israel Adesanya, also known as The Last Stylebender, is a Nigerian-born New Zealand professional mixed martial artist who competes in the middleweight division of the Ultimate Fighting Championship (UFC).

Israel Adesanya isn’t just a great fighter but also has an excellent physique. This is due to his training and diet plan. To help you get the most out of your workouts and eating habits, in this article, we look at Israel Adesanya’s workout and diet plan that makes him so strong and muscular.

See what works for you and follow to achieve your fitness goals and keep healthy.

Israel Adesanya was born on July 22, 1989, in Lagos, Nigeria, to parents Oluwafemi Adesanya (father) and Taiwo Adesanya (mother). He is the firstborn of five siblings. Israel attended Chrisland School Obepi and enrolled in the after-school taekwondo club, which his mother removed him from later due to the injury.

In 1999, he moved to Ghana with his family, but since his parents wanted the best life and education for him and his siblings, they relocated to New Zealand, where he went to Rotorua Boy’s High School.

In high school, Adesanya was interested in Japanese anime such as Death Note and the manga series Naruto rather than other sports. However, students bullied and mistreated him at school, leading to his decision to pursue martial arts years later.

After high school, Israel joined the Universal College of Learning, where he enrolled for a Bachelor of Science in Computer Design. During his time at the college, Israel began training in kickboxing after getting inspiration from Muay Thai films. Two years later, Adesanya dropped out of college to pursue his career in kickboxing. He compiled a 32–0 record as an amateur.

Israel Adesanya’s professional fighting career has been an incredible success. He has won world titles in three different weight classes and is one of the most exciting fighters to watch in the sport. His unique fighting style is exciting to watch and based on a solid foundation of skill and experience.

Adesanya began his career as an amateur kickboxer. He competed in the World Kickboxing Association, winning four world titles and six regional championships as a heavyweight before turning to MMA.

Adesanya began his professional kickboxing career in 2010 at 19, when he won the first of his seven-fight winning streaks, defeating his opponent Tim Atonio by unanimous decision. Following that, he went on to win his final six fights and qualified for the 2014 Kunlun Fight 80 kg tournament, losing to Simon Marcus in the semi-finals.

Adesanya turned pro in his MMA career in 2012 and won his first 23 fights by knockout or TKO, including 13 wins by KO or TKO against fighters who had previously held world titles in other divisions and five wins against current champions at the time of their respective bouts ( Melvin Guillard, John Vake, Stuart Dare and James Griffiths).

Israel Adesanya’s workout routine has been described as a “stylebender,” or someone who has access to a wide range of techniques that can be used in different ways with different results. He doesn’t just stick with one style or one method of training.

He uses a combination of styles and methods to create a unique training camp for himself, making him so successful at this point in his career. His workout routine also depends on how his body is feeling.

He has an omega wave activity tracker that he attaches to his heart and mind. The tracker then sends omega waves to the whole body, and in a few minutes, he gets the information from the tracker on how his body is feeling and how hard he can go in his workout.

If the Omega activity tracker tells him the body is well, he will go hard on his workout and do heavy stuff, but if the body is weak, he carries out less and light exercises. Some of Adesanya’s training styles include:

Adesanya’s workout routine combines three different sparring techniques, which he uses to prepare himself for his fights.

The first is called “bag work”. Adesanya will put on a pair of gloves and then punch a heavy bag until he tires himself out. This technique improves his punching power.

The second technique is “focus mitts,” Adesanya will punch at focus mitts to help increase hand speed and accuracy until he tires himself out. Then he will switch to another pair of gloves and repeat the process.

Finally, Adesanya will use free weights to do squats and lunges to build his muscle bulk.

A shadowboxing workout combines cardiovascular activity with strength training so that you can burn calories as well as tone your muscles. It’s useful because it can increase your endurance, improve your form and coordination, and help you burn calories.

Adesanya loves shadowboxing. It’s a regular part of his workout routine. In fact, he finds himself just doing it without even realizing it, either while pumping gas, waiting, or resting.

Shadowboxing is a great way to practice hand skills and eye-hand coordination. It is also great for warming up before hitting the bag or focus mitts.

Israel Adesanya likes to wrestle a lot, especially in the evening training. Wrestling helps him learn how to switch positions and grape his opponent in the fight. Wrestling training is one of the best cardio workouts you can do.

Adesanya trains hard every day, but he believes there is no better way to prepare yourself than taking long runs. Running is great for cardio and as a fighter, keeps you light on your feet. Apart from the styles mentioned above, Adesanya also does other workout exercises. His training regime focuses on strength, endurance, and conditioning. Adesanya’s daily workout routine includes:

The following are Israel Adesanya’s arm and shoulder workouts:

Israel Adesanya Chest and Back Workouts

Other exercises that Adesanya does to increase speed, agility, and explosives are:

Israel Adesanya’s diet is not just about what he eats but also how he eats. His meal plan is prepared by a nutritionist to meet all of his particular needs for whatever season of training he is in. The nutritionist tracks the calories and calculates what nutrients Adesanya’s body needs to work out at an optimum level. This helps him to maintain his weight and stay in the middleweight division.

Adesanya typically eats five meals a day and a pre-training snack. This helps his body to get enough carbs, healthy fats, and proteins to fuel his workout.

His day begins with overnight oatmeal with strawberries, bananas and chocolate chips to help his body recover from night’s sleep. It’s good to take Oats in the morning since they have fiber that will keep you full for a long time compared to bread or pasta.

When taking his meal, Israel Adenyasa eats his meal in smaller portions but more frequently throughout the day. This helps his body feel lighter. Below is a dietary regimen for Adenyasa. It includes the following:

Pre-fight snacks supply the body with energy. Before an hour to the training or fight, Israel takes a pre-training snack in a small amount. The snack usually consists of:

These snacks have carbs that provide energy to the body without making you feel bloated and full.

Adesanya takes protein supplements in the form of pancakes every day to help boost metabolism, build muscles and curb cravings. He also takes vinegar and chills in the form of spices. Vinegar can help you lose weight and maintain a healthy lifestyle by boosting your metabolism rate and helping you burn fat faster than usual.

He also drinks a lot of water to keep his body hydrated, which helps him stay energized throughout the day so that he doesn’t feel tired or sluggish, like most people do when they don’t drink enough water.

You can now follow these steps to improve your fitness and fighting abilities. It is a demanding workout, no doubt, but training like a true champion like Stylebender will help you build muscle and burn fat faster than others working out under normal conditions.

Remember that changing your diet is not a simple task and should be done with caution by anyone. If you are considering a similar plan, consult your doctor first and ensure you understand the risks. Start training like Israel to Improve your fitness today.