Def Leppard. You know it—the multiplatinum rock band that has been a pre-eminent music power for more than 30 years. It’s one of only five bands in history with two original studio albums that have sold more than 10 million copies in the United States. Def Leppard albums have sold some 65 million copies, and the group is still one of the top touring bands in the world. Def Leppard is legendary, and one reason for that is lead guitarist and vocalist Phil Collen.

We all have our imaginary ideas of what it’s like to be a rock star—the limousines, the parties, the hard living and fast lifestyle. Phil Collen, however, has a lifestyle that’s hard and fast in other ways. Phil lives a life of health and fitness, lifting weights, eating healthfully and training in muay Thai kickboxing as if he were always getting ready for a fight. Whether on tour or just at home, Phil trains at least three times per day under the watchful eye of French and European champion muay Thai kickboxer and trainer Jean Carrillo. That’s right: Even on tour the training continues, with Jean traveling along with the band—and the workouts are just as intense.

It was about 23 years ago that Phil got the motivation to change his life for the better. He was still living the hard-rock lifestyle then, with alcohol being the main curse along with some of the wrong chemical additions—that is, recreational drugs. Booze was sending Phil and his buddies into a dark place. Days would start with frozen vodka and continue with beer and any other hard liquor at hand. Blacking out was a normal part of things, but it came to a point where Phil knew it had to stop. Then he got a sobering wake-up call. One of his close friends, band member Steve Clark, died from an accidental combination of prescription drugs and alcohol in 1991.

Phil’s decision to give up drinking and live a healthful lifestyle was accompanied by his decision to become a vegetarian. He was always put off by the idea of eating meat, he says, so adopting a vegetarian diet really worked for him. 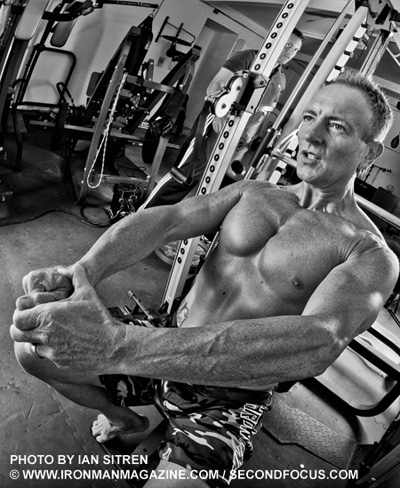 Today Phil maintains very strict control of his eating for a lot of reasons. His regimen involves very substantial workouts, and, when he’s on tour, working around odd schedules and living conditions. Tour bus hours can be late and the days very long. Phil will do what he does at home and do his own cooking, being very careful about watching calories and eating typically six meals per day. Cheating might be the occasional Indian or Thai food, but Phil says that as he gets older, it’s harder to take off weight, so he’s very careful about not gaining it.

Then there are the amazing workouts. Phil is devoted to pounding at it no fewer than three times per day—and I mean pounding. At home you’ll find him in what’s called “Phil’s Sweat Shop,” a garage filled with gym equipment. I must tell you, too, that Phil is a humble guy with none of the outward indications of his “star” status but one—the new Aston Martin he backs out of the garage to make more room. Once the car is out of the way, watch out. Along with the weightlifting comes some serious kickboxing.

Reenter Jean Carrillo, who’s fought and trained around the world. He was in France’s Marine Corps Special Forces and served in the Security Forces in Africa with the French Foreign Legion. He’s trained military personnel and police and continues to work with beginners, amateurs, kids and professional muay Thai and MMA fighters—all the while modeling and teaching a healthful lifestyle.

A workout day in “Phil’s Sweat Shop” typically starts with pounding the weights. Like most of us, Phil concentrates on certain bodyparts at each day’s session, but he also integrates his “pad work,” which has him throwing high kicks—that is, hard, full-on fight kicks—over and over and over at the pads that Jean holds. Put it this way: You wouldn’t want to be on the receiving end of one. It’s an incredible cardio and fat-burning regimen that includes lots of hard breathing and sweat pouring off Phil.

So it’s weights, pad work, heavy bag, pushups on the floor, abs—all fast and hard. And that’s only one of the day’s three workouts. The others might consist of cycling or a changeup.

You can easily see why it takes six meals per day to support that workout schedule, but you might wonder how it would work with a vegetarian diet, especially in terms of protein. Phil gets a lot of his protein from soy—like soy chicken, soy “meats” and shakes. Nuts are another component, but as Phil says, most people slug down handfuls when they should be eating only five or six. Another mistake people make when going vegetarian is eating a lot of bread and cheese. Phil advises keeping it green and raw overall.

Can you imagine going on tour with him—veggies, pushups, kickboxing and all? It’s a far cry from the days when performing at a rock concert meant sucking down whiskey or vodka and snorting a white powder. Phil’s colleagues have embraced the fitness lifestyle too, although perhaps not as aggressively as he has. Before going onstage, they often work out with pads or maybe with towels, doing stretches and arm training or even hitting the floor for pushups. Phil says he has more energy now than he had as a kid, when he started playing in bands—and at 52 he certainly has more life in front of him now than he would had he gone in the other direction.

Considering all the workouts, his nutritional schedule and Def Leppard, you’d think Phil has enough going on, but there’s plenty more. For one thing, there’s his love of guitars. He very often will just sit down and plug in to the systems in his dining room and roar away on one of his many guitars. He’s worked with Jackson Guitars and Fender on his own designs, which he uses and is very proud to have developed. He combines everything from heavy picks and heavy strings with his own special choice of amplifiers and equipment to make his work unique. Indeed, Phil is considered one of the top rock guitarists ever.

Then there’s Phil’s other rock group—Man-Raze. Formed with his former bandmate from “Girl,” bassist Simon Laffy, and drummer Paul Cook from the Sex Pistols, Man-Raze is recording and playing live, has toured and will be touring again.

Def Leppard goes on tour again in 2011, and “Hysteria” lives on, delighting current and new generations. Phil says it’s because the band has never broken up and has remained true. Even after 65 million albums sold and legendary status, the band continues to record and do new things too.

Much of Def Leppard is Phil Collen, a guy who lives a life of health and fitness, a guy who leads by example and hopes to be doing more soon to help people live their lives in a healthful, fit way. One change for Phil this year that makes it even better: He got married to a wonderful woman, Helen, who is his equal in talent—in her career and in her desire to do better things for the people around her.

Def Leppard has brought much to the world. Now Phil Collen brings us much more. IM