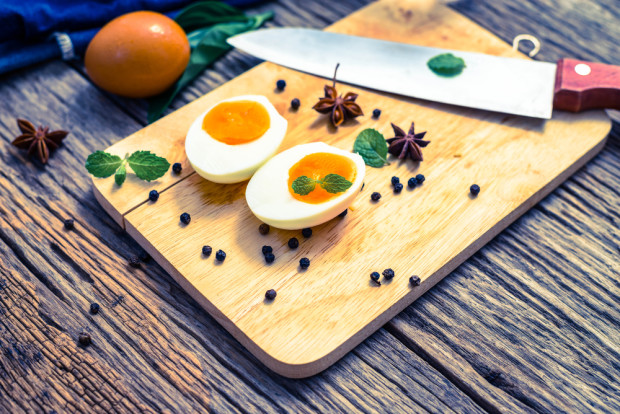 We all want to look better, lose fat, and improve our fitness levels through the food we eat. However, many of the biggest nutritional misconceptions revolve around dietary fat. Although this single macronutrient is often believed to be dangerous to your health and deadly for your abs, more and more evidence has emerged showing that fat optimizes several factors that contribute to a lean and muscular physique.

Weight-loss diets are frequently associated with cutting fat from a diet. This is because dietary fat is the most calorie-dense macronutrient, offering nine calories per gram, while carbohydrates and proteins contain four calories per gram. However, many people like to think of fat as simply the storage form of energy that gets packed onto the love handles. But variations in the structure of fatty acids elicit different physiological functions. Fat offers many functional roles in our bodies, including aiding in cognitive function, cardiovascular health, muscle and bone health, and immunity. Fats are also incorporated into cell membranes, provide insulation, serve as signaling molecules, aid in the transportation of fat-soluble vitamins, and are building blocks of other essential compounds. Fat is also said to have “pharmaceutical”-like effects by helping to maintain sex hormones such as testosterone, potentially enhancing mood states, reducing inflammation, and even assisting in body-fat control. Achieving recommended fat intake is an important goal; however, the quality of fat in the diet is equally as important as the quantity of fat. There are two categories of essential fatty acids that need to be consumed regularly from the diet: omega-6 and omega-3 fatty acids. Both omega-6s and omega-3s contain double bonds along the carbon chain, but differ in the placement of this carbon-carbon double bond, giving them different properties and physiological functions. Generally, omega-3 fatty acids are anti-inflammatory, while omega-6 fatty acids are pro-inflammatory. Omega-3 fatty acids are found in nuts, flaxseed oil, green vegetables (spinach, arugula, kale, broccoli), and fatty fish such as salmon, all of which are typically under-consumed in the American diet, while omega-6 fatty acids are found in over-consumed foods such as vegetable oils, salad dressings, commercially raised meat, and eggs. (Organic grass-fed meat and pastured eggs have more omega-3s and less omega-6 than factory-farmed meat and eggs.) Although omega-6 is deemed an essential fatty acid, most Americans have no problem reaching optimal levels in the diet. On the other hand, the typical American diet does not seem to reach optimal levels of omega-3. For this reason, omega-3 supplements have become very popular to make up for the deficiency. While the recommended omega-6:omega-3 ratio is 7:1, the typical American diet is 17:1, which may increase low-grade inflammatory states linked to autoimmune disorders and cardiovascular disease. Regularly trying to consume fat sources rich in omega-3 fatty acids can help tip this ratio in your favor.

Coconut oil has recently been flaunted as the latest and greatest superfood. Along with being regarded as a healthy fat source, claims have emerged touting coconut oil as a superior energy source, fat burner, and appetite suppressor. Coconut oil is a natural food product containing a relatively high amount of medium-chain fatty acids (MFA). MFA have received a lot of attention in sports nutrition due to their metabolic differences when compared with long-chain fatty acids (LFA), which are found in vegetable oils and animal fats. Our bodies absorb and metabolize MFAs quicker than LFAs resulting in an increase in energy expenditure. Therefore, by swapping LFAs for MFA-rich coconut oil, you should burn slightly more calories. However, researchers recently investigated the effects of having healthy adults replace their usual cooking oil with coconut oil for four weeks. The substitution of coconut oil did not significantly alter any body measurements, including body weight, body-fat percentage, and muscle mass. Additionally, coconut oil supplementation did not alter total cholesterol, HDL, or LDL values. While MFAs do produce a slightly greater thermogenic effect (to the tune of about 40 calories) in comparison to LFAs, it’s unlikely that simply adding coconut oil to your diet will lead to meaningful weight loss over the long term. Eggs have been both glorified and scolded over the years leaving consumers, including athletes, hesitant to add whole eggs into their regular diet. The egg white, also known as the albumin, is a complete protein source containing all the essential amino acids; however, it is the yolk that tends to scare people away from eggs. The fatty acids found in the yolk are primarily oleic acid, a monounsaturated fat, while the remaining fatty acids are saturated fat and polyunsaturated fat. Other than fat, there are two other noteworthy components of egg yolks. Firstly, egg yolks are very rich in choline, a nutrient associated with several\benefits, including cognitive health. Secondly, although egg yolks do not provide much protein, yolks are enriched with the essential amino acid leucine—the primary activator of muscle protein synthesis. Given the large percentage of fatty acids and cholesterol in the egg yolk, whole-egg consumption has been suggested to promote cardiovascular disease; however, randomized controlled trials comparing diets with or without whole eggs have not found an association between whole-egg consumption and an increased risk of cardiovascular disease. One study in Nutrients investigated the impact of breakfasts (with or without whole eggs) for 14 weeks on bodyweight and blood lipids in college students. No differences between groups were found for bodyweight or blood lipids. Similarly, a study in The American Journal of Clinical Nutrition reported whole-egg consumption did not have any adverse effects on the lipid profiles of people with type-2 diabetes. Lastly, a study in the Journal of Clinical Lipidology reported improvements in HDL and LDL levels when eating three whole eggs per day compared to eating three yolk-free eggs per day in people with type-2 diabetes and metabolic syndrome. When consumed as part of a healthy diet, whole eggs are a nutritious and convenient way of improving protein and micronutrients in the diet and may even aid in satiety and weight management.

Natural, low-fat, sugar-free, cholesterol-free products sound healthy, right?  However, food manufacturers often take advantage of this through very simple labeling tricks. It is important for consumers to understand what these labels really mean. “Natural” actually has no formal definition when applied to products that do not contain meat or eggs. (Heck, sugar is natural.) “Low fat” means that the product contains three grams of fat or less per serving, while “fat-free” or “zero fat” means that the product contains less than half a gram of fat per serving. This doesn’t sound bad at first, but remember that serving sizes may be very small. Also, the fat source can include trans fats. Lastly, when fat is removed from a product, so is the great taste. Consequently, many companies will load the product with extra sugar to make up for the missing fat. While these foods are not inherently unhealthy or dangerous, it’s important for the consumer to look beyond the label and understands what they are really eating. IM