I could not sleep last night. At 4 a.m. a song I haven’t thought about in a long, long time was thumping through my head—a very clever ditty called, “Smut,” by the legendary Tom Lehrer, a Harvard and M.I.T. math professor and underground satirical song writer of the 1960s and ’70s who went wide via a TV show called “That Was the Week that Was” and wrote some of the wickedest stuff ever penned by a math professor or anyone else. You can Wiki him. Or you can listen to the number in question here.

Not to get too deeply into early-’60s nerd humor or U.S. history, but “Smut” was an anticensorship  “protest march” that glorified pornography—back when you could go to jail for selling what you can now see online for free. Its lyrics reference a 1957 Supreme Court ruling (Roth v. U.S), in which, the court said, among other things, that, as Lehrer put it:

“To be smut it,
It must be ut-terly
Without redeeming social importance.”

Of course, subsequent rulings and the Internet have blown all that all to heck, but in a time when Playboy was considered too risqué for the room, Lehrer’s glorification of all things prurient was pretty funny. Still is. Some how in the wee, small hours, with lines like this keeping me up, it seemed totally to the point:

When correctly viewed,
Everything is lewd.
I can tell you things about Peter Pan,
And the Wizard of Oz—there’s a dirty old man.

Which brings me to the other thing that was running concurrently in my brain: a photo that I had seen recently—several actually—of a fast-rising pro bikini competitor doing the stride and snap to the rear. Except instead of snapping she’s holding with her legs astride and her glutes popped up and out in a stance that says, “Soldier, take aim!” Now, I’m no prude. Yeah, I hate it when people say that too, but, seriously, I was an editor at one of the dirtiest magazines on this planet at one time, and it takes a lot to shock me. Consequently, I like to think I know a Beaver shot when I see one.

One of the most striking things about pro bikini competition so far is how much more polished the women all look than those at amateur shows—smoother body lines, smoother presentation—with each on the road to finding her signature poses from the front and back. Most of the back shots are kind of cute—sassy, with the head and hair tossed back and a knowing smile.

I think most women (well, a lot) have fantasies of looking hot in a bikini or lingerie and heels and exuding a ’tude that says, “Eat your heart out”—even if some of us prefer to keep it to an audience of one. The success of bikini in the NPC and other organizations is ample evidence of that. Thanks to the Supreme Court and generations of First Amendment fanatics, the bikini gals have the right to do it, too, onstage and in front of a cheering crowd, without the place getting raided. And I will defend to the end that right.

Still, when I was flipping through the online photos from the prejudging of this particular show and happened upon the picture, it was like, Whoa, Dude, that moon’s bright! I wondered if the judges would agree and take it into account. Based on the results, I don’t think they did; so maybe it was just me.

It’s not because it was a back shot, BTW. I’ve seen some front-view poses that made me stop short since bikini hit the NPC circuit last year. You have to admit, though: things are always smuttier when they involve that angle. (Remember the “Sex in the City” episode when Charlotte doesn’t want to be the “up-the-butt girl”?) 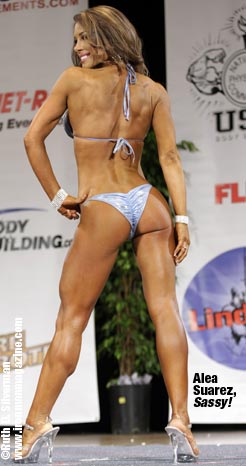 Sass has become the buzzword for bikini—it’s all about sass, as one early winner told me last summer—and there’s nothing wrong with sass. Or crass, for that matter, but I have to ask the questions, When does sass become crass, and should it matter in a quasi sport like pro bikini competition?

I’m talking about onstage posing here. Off-the-stage female fitness modeling—in all its forms—is a whole other subject. I will point out that not every gal who tries on an ultrasassy look looks as good in it as the young woman discussed above, something every aspiring bikini babe should consider when putting together her presentation. That’s a whole other conversation as well but worth mentioning.

I don’t usually solicit replies here, but I’m interested in knowing what people think about the sass vs. crass issue. There has been some sharp talk on the Internet, mostly from commentators of the male persuasion, but I’d like to hear from women, especially bikini competitors and other physique athletes. If I’m overreacting, I’ll stop whining and start practicing my “stride and pop to the rear” (for those private performances). If people would prefer to see some limits, though, I’d like to hear it.

All the photos included here come strictly under the heading of sassy in my book. I’m not running a shot of the competitor I mentioned, as it’s not my intention to embarrass her—or anyone. You can find pictures online easily enough (how many pro bikini shows have there been?), or you can find similar photos of other competitors. Do they set off your crass meter? Leave a comment below or drop me a note: [email protected]

This weekend the IFBB Pittsburgh Pro Bikini and Pro Figure competitions are going down in my hometown—offering plenty of opportunity to browse the photo galleries and see what I’m talking about.