I’m so pleased to see the Power Surge series by Sean Katterle. His first [installment] on the bench press was interesting and eye-opening [February ’09]. Keep the powerlifting stuff coming, but please include strongman info too. I’d love to read how those mega-strong guys train.

Editor’s note: We agree: Sean’s new series, sponsored by MHP, is a welcome addition to IM—and he promises to include some strongman info in the near future. Stay tuned.

The Wilson brothers’ article on fat burning cleared up so many questions about interval vs. steady-state work [“Scientific Cardio,” February ’09]. I’ve been trying to decide which way to go, and there was my answer from two of the best researchers in the business. Thank you.

I was paging through the January ’09 issue and came across a full-page photo of the best-looking guy I’ve ever seen. In fact, I took a picture of that page with my cell phone and keep it as my opening screen. Very nice indeed!

Editor’s note: That’s our editor in chief, Steve Holman—but you know that because you’re his wife, and you obviously have a knack for boosting a guy’s ego.

I need to get something off my chest. Over the past few years in IRON MAN there have been several references to the fact that Frank Zane invented the Leg Blaster. In fact, a man named Jim Moore invented it back in the 1950s. He lived in Charlotte, North Carolina, before he died. I think his widow still lives there. I bought a Leg Blaster from him in the ’70s, and I still have it and use it. Mr. Zane did modify the original, but the idea was Mr. Moore’s.

Editor’s note: Frank Zane’s version of the Leg Blaster is available at www.FrankZane.com. 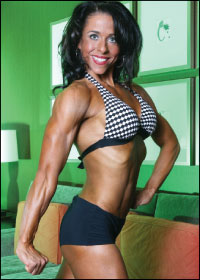 I wanted to thank Lonnie Teper for featuring me in his Rising Stars section in the February issue. It’s such an honor to be in IRON MAN. I know you have plenty of athletes to choose from, so it made my day when I got that issue and saw my photo in it. And, of course, I had to buy a few extra copies for my family and friends.

Editor’s note: And thank you for boosting our circulation by a few issues.

I just read the e-book The Ultimate Fat-to-Muscle Workout in one sitting. I am amazed at how the authors [Steve Holman and Jonathan Lawson, www.X-Rep.com] took the latest research, made it understandable and then put it all into a concise workout plan. I can’t tell you how motivated I am to hit the gym. My transformation has officially begun! Many thanks for this priceless reference.