Amy Fries the Competition at the Pittsburgh Pro Figure

Hometown honey Amy Fry scored her first pro victory at the ’08 IFBB Pittsburgh Pro Figure Championship on May 3, surprising absolutely no one who’s been paying attention to current action in the figure ranks. Second was Nicole Wilkins, who’s now earned Olympia qualifications in both the fitness and figure—also not a shock to this reporter—while Teresa Anthony, flying under the media buzz, picked up the third Big O slot in her pro debut.

Nineteen built-by-barbell bodies lined the stage in the Soldiers and Sailors Memorial auditorium for Jim Manion’s annual event, held in conjunction with the NPC Pittsburgh Championships. It was the first show since the Figure International—and since the athletes received a letter from the IFBB Pro League (of which Mr. Manion is the chairman) asking them to tone it down, physiquewise. The perceived wisdom in the press pit was that the ladies had complied. I was too focused on trying to photograph them to notice at the time, but in comparing photos from the two shows—and allowing for differences in lighting, cameras and other relevant factors—it appears that they did, somewhat, starting with Fry, whose six-pack and shoulders were not quite as etched.

Heather Mae French brought a beautiful presentation to the stage and finished fourth, making this the breakout competition she’s been seeking since she hit the pros a couple of years ago. Fifth went to veteran Shannon Meteraud, whose lean, not-too-hard and not-too-soft body may have been at its best ever. There’s little doubt that both those athletes will get their Olympia qualifications by season’s end. Other ladies who caught my eye included Heather Green, Catherine Anderson and Huong Arcinas. As they finish sixth, seventh and eighth, respectively, I guess you could say I agreed with most of the panel’s choices. Bernadette Galvan and Allison Williams rounded out a strong top 10. 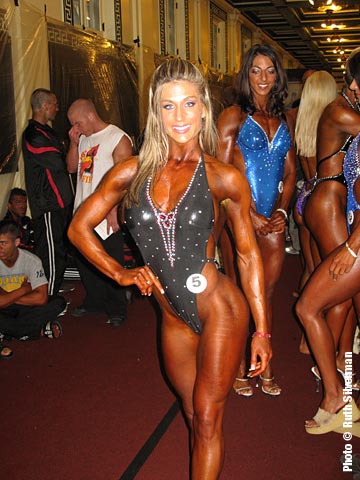 As mentioned above, Fry was the hands-down favorite to win this show (she placed third here last year), and not just because she comes from Pittsburgh. The prediction was a “well, duh”—she was coming off a third-place finish at the International and outranked everyone else in the lineup. Any hometown advantage was backed up by the package she brought to the stage.

Many of the women who came to quarter-turn in Pittsburgh were headed next to LosAngeles for the IFBB California Pro Figure Championship on May 24 at the Veterans Memorial Auditorium in Culver City. That’s Memorial Day Weekend, which has become a huge time for physique festivities in the L.A. area, including the Cal Pro, the accompanying NPC California Championships (now open to United States residents from all 50 states) and the Muscle Beach International Classic in Venice on May 25 and 26. At the Cal I’ll have a real photographer or two on hand, so I can concentrate on looking at what I’m looking at and get a better handle on the Goldilocks factor—as in who’s coming in not-too-hard and not-too-soft but just right.

For info on the Cal, go to www.MuscleContest.com. For more on the Muscle Beach events, check out

• Class dismissed. Hometown honey Amy Fry did her homework and got extra credit.

• The first callout could have been the winner’s circle shot: Amy Fry in the center, with Nicole Wilkins in the second-place position and Teresa Anthony on the other side, in third. I was so impressed with Teresa, I thought she’d be the runner-up—another example of why I don’t get good marks at reading the judges’ minds.

• Petite powerhouse. At 5’ Heather Mae French proves that you don’t have to be tall to look tall.

• Ask Shannon Meteraud how she got in such great shape and you get a quick answer: “Mother of two.”

• Heather Green, also a mother of two. Wow. Maybe there’s something to that.