It was no contest, according to the panel at the New York Pro Figure, held last weekend in Hackensack, New Jersey. Cheryl Brown was queen of the hill, top of the heap, nailing a perfect score to earn the second title (after the ’09 Kentucky Pro last November) of her relatively short  career. Brand-new pro Dana Fallacara was four points behind Terri Turner after the one-piece comparisons but made a real impression in the two-piece round to pull into the runner-up spot.

Another new pro, Josie Zamora, who beat Fallacara in the battle for the overall at the Junior Nationals last month, took fourth, while Gennifer Strobo, who’s qualified for the ’10 Olympia thanks to a couple of previous third-place finishes, rounded out the top five.

It was a big lineup—32 women took the stage—but not really the deepest we’ve seen this year. As I perused photos of all the competitors, I couldn’t help thinking, and not for the first time, how thin the line is between pro figure and women’s bodybuilding—in terms of leanness as well as muscularity. The one-piece suits in particular can be less than flattering on ultralow-fat physiques, and there was enough of that in evidence in New York/Jersey to make me cheer today’s IFBB Advisory Notice (superseding  a previous advisory notice) that the one-piece round is now history. 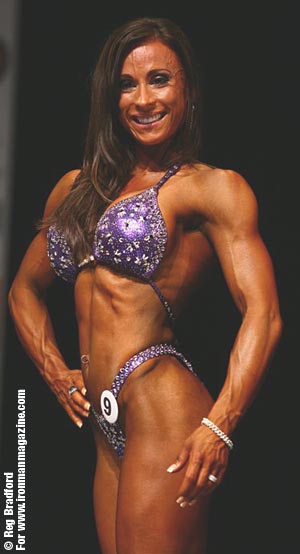 Another thought that stuck out (pun intended) as I went through the pictures: Flow of the bodyparts is key in figure as well as bodybuilding. Sometimes I want to scream, “Big shoulders are not the answer to everything.” (But I don’t…I don’t.… The heck I don’t.…)

Brownie, who was the favorite going into the competition, had the best blend of balance and conditioning in the lineup, and the panel wasn’t going to pass on a sure thing. The rest of the top placings looked pretty reasonable as well to this desk chair observer, including Turner, who was due for an Olympia qualification, in third. Strobo wasn’t at her best—could have been fuller—creating the opportunity for a pair of talented and hungry rookies to slip in ahead of her.

Gina Trochiano, who got her pro card at this show, at the Team Universe, in ’09, made a strong debut in sixth, while Meriza DeGuzman, still seeking an Olympia invite for this year, landed in seventh.

Re the one-piece suits. The organization’s reasoning on this may not be the same as mine, but we certainly agree on the outcome. Starting with the next pro figure event, the Europa Battle of Champions in Hartford, Connecticut, on July 23 and 24, and henceforth, including at the Olympia, there’s will be on only one round of comparisons in figure, two-piece swimsuits.