Not Your Typical Workout 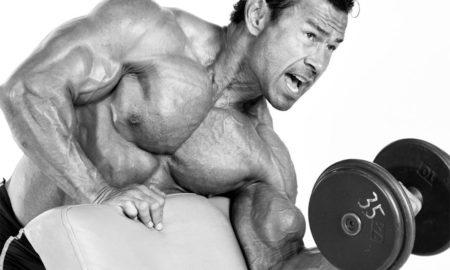 Before the rise of mass monsters in bodybuilding, sharply defined and athletic legs were considered paramount for complete physique development. As bodybuilders became larger over the years, however, the focus has shifted from athleticism to a “size at all costs” approach.

The Secret of Champions

Sprinting at one time was considered a cornerstone of any bodybuilding program and was regularly performed by almost everyone from the early 1900s all the way to the 1970s. In fact, sprinting is mentioned in interviews with bodybuilding champions through the decades, and even by turn-of-the-century strongmen such as Eugen Sandow and Arthur Saxon.

Since sprinting is often considered to be cardio, it’s been routinely ignored by modern bodybuilders. What someone does for cardio is far less interesting than how much weight they lift and their weekly routine. Unfortunately, this led to sprinting being overlooked for far too long. It’s time for a comeback.

Sprinting has a multitude of training effects that make it unparalleled as an exercise. If you aren’t sprinting, you’re missing out on improved body composition, more muscle, and an elevated metabolism. Sprinting is that powerful.

From a purely cardiovascular standpoint, sprinting is a form of interval training and burns more calories per minute than any other activity. Performing intervals at a high intensity has been demonstrated to selectively target and burn abdominal fat (ever seen a world-class sprinter without abs?) as well as elevate the metabolism for up to 48 hours.

From a muscular standpoint, sprinting makes use of the body’s largest and densest muscle groups: the glutes, hamstrings, and quads. While sprinting may not be a mass builder in the same class as squats, it does stimulate hypertrophy, especially in the glutes and hamstrings.

In addition to the metabolic and muscle-building benefits, sprinting also stimulates the abdominals. While this may not seem intuitive, the mechanics of sprinting require a high degree of abdominal activation and anti-rotation to keep the torso stiff while accelerating and hitting full speed, as well as during deceleration.

With so many potent effects, it might seem surprising as to why people don’t regularly incorporate sprinting into their regular programs. Benefits aside, there are a few obstacles that have to be addressed before adding sprinting into a program.

Running Up That Hill

If someone has never sprinted before, it can be a fast way to pull a hamstring. Learning how to run must happen before attempting to sprint. And even if you do know how to sprint, how do you do it without a track?

There is an easy solution found in any gym: a treadmill set to a high incline. While attempting to sprint on a level treadmill is awkward and doesn’t allow for a natural acceleration, sprinting on an incline is an excellent way to learn sprint mechanics, as it forces you to use a proper gait in getting the knees high in front of you, using your arms to accelerate, and leaning into the movement.

Compared to a flat sprint, an incline sprint feels much more natural. Running on an incline also slows down the sprint, so you can reach your threshold in a safe manner. A 10 percent grade is the sweet spot; this allows you to accelerate to top speed, which for most individuals is around 12 to 15 mph, and is the maximum speed for most treadmills. IM

The following program may be a bit different than any you’ve done before. You won’t be doing isolated machine work for any muscle group other than calves. The workout consists entirely of barbell basics done one after another. While the workout might not look like many exercises, the volume will quickly add up.

Performing the sprints first in the workout will provide an adrenaline and growth-hormone release that will leave you feeling energized for the rest of the workout. It will also negate the need to excessively warm- up. By the time you’re done with the sprints, your core temperature will be elevated and your legs will already have a pump. You will be able to proceed into the working sets of every exercise.

The workout is designed so that as you fatigue the movements’ progress from hardest to easiest. For instance, the squats and snatch-grip deadlifts are the heaviest movements with the greatest ranges of motion, so they are performed first. The exercises are also staggered, so while your quads are recovering from the squats, you’re working the glutes and hamstrings with the deadlift. For the barbell loads, start with either your bodyweight in pounds on the bar or 60 percent of one-rep max. With the bar as high as is comfortable on your neck, take an approximate shoulder-width stance and allow only a slight external rotation of your feet. Immediately prior to commencing the descent, bend your knees slightly, suck in the lower abdomen, and squeeze your glutes.  This will “set” your pelvis in a slightly posteriorly rotated position.

As you come down, keep your hips in line with the spine. You can flex forward at the hips, just don’t change the hip/spine relationship. Squat as deeply as you can without exceeding a 45-degree trunk flexion relative to vertical.

Keep your knees equal distance apart during the lift. Immediately prior to the ascent, focus on squeezing your glutes and holding them tight during the concentric phase. The aim here is to prevent anterior rotation of the pelvis during the initial phase of the ascent. This is a tough technique to master, but it is worth it.

Approach the barbell and align your feet directly underneath, with the bar almost flush against your ankles. As you bend down, the barbell should slightly scrape against your lower shin. Grab the bar with double the approximate grip of your shoulders. Using a firm double overhand grip, push your hips back, and allow your shoulders to drift over the barbell. Explode up with the barbell, using your glutes and hamstrings as the primary driver. Your upper back will be stabilizing the bar path. Reverse this movement to begin each successive rep. You may “touch and go” reps using this technique.

Load a barbell with approximately two-thirds of your bodyweight, and approach the bar as you would a conventional deadlift. Using a double overhand grip, grasp the bar and stand up with the weight. From this position, hinge back and lower the bar to a point one to two inches below your knees, then explosively contract your hips to lockout, squeezing your glutes on each rep. Perform all repetitions this way, with explosive concentric and eccentric phases. Use a Smith machine and place a barbell pad or a towel on the bar. Set the bar to a height that is abut two 18 inches off the floor (the shin of the working leg should remain vertical). Place the rear leg on the bar so that the crux of your ankle rests comfortably on the bar pad. Place your hands behind your head and focus upon keeping your torso vertical throughout the movement. Begin the descent by bending the knee of your working leg and drop the working hip toward the floor. Descend until your knee of the back leg is just a bit above the floor, then come back up. Use a controlled tempo of 5/1/5—five seconds to descend, one second at the bottom, and five seconds to return. Begin with your own bodyweight. If that’s too easy, hold a pair of dumbbells.

Using a standing calf raise machine, load it to a weight that is challenging for five or six reps. Select the appropriate height so that the weight loads the calves while they are in a full stretch. If possible, perform the movement barefoot or in socks. Begin by descending into a full stretch with the calf muscle. Pause for five seconds in this position, then explode up hard through the concentric. Press through the big toe of each foot. Pause for a full two seconds at the top of each rep, then slowly descend for a full five seconds back into the eccentric stretch. Hold this stretch for five seconds, then repeat.