Wake up sleeping muscle groups with this carefully curated group of exercises.

Within pop culture, the idea of “hacking” is a popular one. The ability to do something in less time and bypass the requisite work normally involved is very appealing. With muscular growth, however, there is no way to “hack” your way to greater gains. Even with hormonal enhancement, it’s still a time-dependent process. That said, it is possible to effectivize your training, and the more effective your training is, the more consistent your results will be.

So if we can’t hack muscular growth, what can we hack with training? The mind-muscle connection. Or more technically, neuromuscular innervation.

For many years, the mind-muscle connection, or MMC, was considered something of a myth. While the idea of using “mind power” to contract and control the muscles wasn’t an insane idea, there wasn’t much clinical evidence to support it. Over the last 20 years, though, there has been a major expanse in neurophysiology. A greater understanding of how the brain works has lead to an improved understanding of the relationship between the body and brain.

The muscles’ ability to contract is something that can be consciously controlled, and along with neuromuscular drive, the brain’s ability to “electrify” a muscle with neurons and forcibly contract the fibers can be trained and improved. When old-school bodybuilders spoke of “feeling the muscle work,” it wasn’t broscience, but rather an intuitive understanding that the body and brain were intricately connected and that neurological focus could directly affect the performance of a given muscle during an exercise.

Contrary to common belief, the MMC can be developed fast. In fact, it can be hacked. And it doesn’t require anything but very specific execution of carefully selected exercises. The exercises have to fulfill the following criteria:

Starting from the top of the body and working down, here are the exercises you need combined with specific contraction techniques that together create massive neural drive to “wake up” your muscles.
TRAPS
Exercise: Meadows shrugs

These are dumbbell shrugs with the dumbbells held just slightly in front of your thighs. On every rep, hold the peak contraction a full four seconds before lowering back down.
Why It Works: Most people never put much work into actually contracting their trapezius, especially their upper traps. Shrugs are often done fast with a jerky cadence. When you have to hold a peak contraction repeatedly, the innervation happens quickly.
Coach’s Notes: These are best used in three to four sets of 15 reps. Perform with a full four-count so each set is over 60 seconds long. If you’ve never truly felt your traps work or struggle to get them to grow, these will do it. Credit goes to bodybuilding innovator John Meadows for being the originator. This is a static movement. Hold a set of light dumbbells at shoulder level with your arms outstretched. Do not fully lock out your elbows when doing this movement. Tilting the dumbbells down slightly, as if pouring water from it, will elicit posterior and medial delt activation. Do not let your shoulders rotate in or allow your posture to collapse.
Why It Works: Shoulders can be a stubborn muscle group. If your shoulders don’t grow from heavy pressing, and you have difficult feeling them work, prolonged time under tension can get them fully firing. Lateral raises are often improperly done as well, and in practice, training the shoulder with applied intensity can be surprisingly hard.

Coach’s Notes: Aim for a 60-second hold, with a minimum of 30 seconds. Two sets is generally enough. This can be done as an activation or a finisher movement on any upper-body pressing workout. Set a bench to between 30 and 45 degrees, and position the body so your head is over the top of the bench, and your chest and torso are resting on the bench. Your feet should be braced against the floor. Assuming a neutral grip on the dumbbells, drive your elbows behind your body. Hold each rep for a full two-count pause, then lower the weight. If grip is an issue, use straps.
Why It Works: Most rowing movements are done with some degree of momentum. With the body inert against the bench, however, it’s purely the rhomboids, lower traps, and teres major and minor doing the work. There is no way to cheat this exercise at all. For people who are used to heaving weight, this can be very humbling to do the first time. It’s also very joint friendly and suitable for any level of training, especially anyone whose low-back health may be a concern.
Coach’s Notes: High reps work best for this exercise for creating a pump and prolonging the time under tension. Complete two to three sets of 12 to 25 reps. 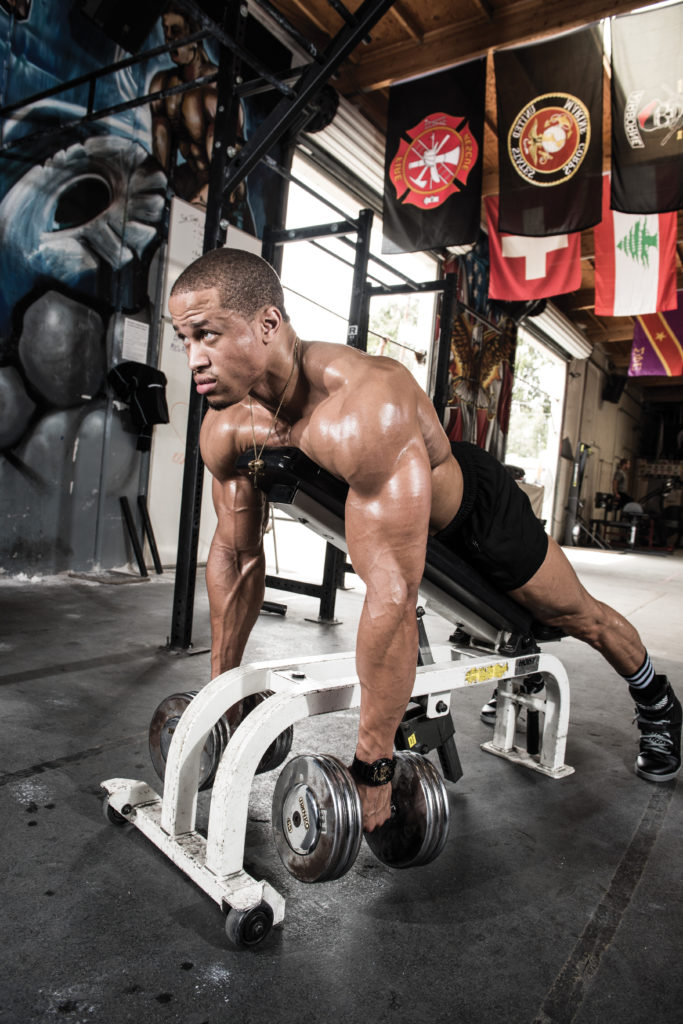 Begin in a half-kneeling position. Your working-side knee will be down (so if your left arm is pulling, your left knee is down) with your opposite foot planted. The handle should be set higher than you can reach so there is constant tension through the movement. When pulling down, drive your elbow tight to your waist. Do not allow your shoulder to get too elevated when releasing the weight back up. Your scapula should stay depressed the entire time.
Why It Works: By performing one side at a time, and from the kneeling position, all of the internal focus can go into the working side lat and getting a full stretch and contraction on every rep.
Coach’s Notes: Perform two to three sets of about 15 reps. The lats can take quite a few reps before a MMC begins to develop, so this is one movement you’ve got to perform slowly and with control. Forcibly contract your lat as hard as possible in the fully contracted position, and slowly allow your shoulder blade and lat to be stretched on the eccentric portion of the rep. Use a V-bar pushdown handle as it allows for a comfortable biomechanical position with the grip. I also favor a more relaxed style of keeping the elbows in front of the body with a slight forward lean and hips back. This allows for a greater stretch, especially of the long head. The concentric portion of the rep can be performed on a natural tempo with a peaked contraction at the lockout, but the eccentric is done on a full three-count.
Why It Works: An issue with training triceps is often feeling it more in the “bone” of the elbow versus the belly of the muscle. People often mistakenly focus on the sensation of the joint versus feeling the muscle work. Triceps movements also have a tendency to be done sloppily, and ask any older lifter about their elbow health and they almost always advise you to train lighter (and for the love of god, don’t go heavy on skullcrushers).

Coach’s Notes: Complete two to four sets of eight to 15 reps. A controlled eccentric can surprise the hell out of people who are accustomed to fast and furious reps. Remember, quality reps beats quantity of reps. These are a classic, and they work. With a dumbbell in each hand, curl the weight halfway up for seven reps using a supinated grip. Then curl through the top half of the motion for seven reps. Finally, curl the full range of motion for seven reps.
Why It Works: The number-one issue with training biceps is most people simply rush their reps. They get caught up in getting stronger at curling, so they cheat reps and then claim they can curl the 50-pound dumbbells. If you can’t feel the muscle working doing the exercise strict, you don’t get to cheat it. And 21s absolutely force you to feel it.

Coach’s Notes: Perform two to three sets of the 7-7-7 rep scheme with a moderate load. You may also use a band instead of dumbbells, as the accommodating resistance of the band creates active eccentric tension that further contributes to feeling the muscle working. Also known as a reverse plank, this movement is very simple. Your legs are lifted off the floor until they are straight up above your hips and your upper torso is curled upwards as high as possible. Your rectus abdominis is engaged from top to bottom, and this position is then held isometrically as long as possible.
Why It Works: The trend toward “functional” training has largely neglected the most basic function of the abdominal wall and muscle: flexing the torso forward. Focusing on rotational movements or dynamic stabilization is pointless if someone doesn’t even possess the abdominal strength to sit up straight from lying down. A dead bug requires a contraction from both the “upper” and “lower” sections of your abdominals.

Coach’s Notes: For the dead bug, perform two to three sets of 30 to 60 seconds. If you can hold it for longer than one minute, progressively lower your legs, or load the movement by holding a weight with your hands. In this movement, you will be using the lying leg curl machine. Set the pad to right above your ankles and select a moderately challenging weight. Lying flat on the pad, curl the weight all the way to the contracted position. From there, perform partial one-third range of motion reps. Aim for 40 to 50 repetitions. Follow that with eight to 15 full range of motion reps
Why It Works: Hamstrings are notoriously difficult to feel. By performing partial reps, the hamstring muscle is forced to engage concentrically over and over again, increasing neuromuscular drive. The full range of motion reps that follow strain the eccentric position and allow the blood that has built up to flood the length of the muscle.

Coach’s Notes: This exercise has a tendency to make the hamstrings cramp up, but it is incredibly effective for creating a mind-muscle connection from scratch.