Goin’ To The City, Woo Hoo! 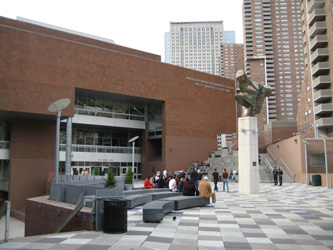 Usually about the same time of the year when the pro shows are being held, a couple of other great event are happening too. Starting today, April 21, and running until May 2nd, the Tribeca Film Festival is going on. I won’t make it this year but for those who are in the area and are film buffs, check out the festival at this link, www.tribecafilm.com/festival/ for more information. The second event that I would like to mention is the Taste of Tribeca which is being held the weekend after the pro shows. Last year the Taste of Tribeca was held the same weekend as the pro shows. After prejudging on the way back to the hotel, I made a detour for about an hour enjoying the food and music. It was an awesome time and it is all for a good cause; money raised during the festival benefits PS150 and PS234, two local public schools in the area. For additional info, go to www.tasteoftribeca.org/ or just show up at Duane and Greenwich Streets on May 15th, rain or shine.

For those who may have some time on championship weekend and are photo buffs, the Museum of Modern Art has an exhibit displaying the works of photojournalist Henri Cartier-Bresson. Bresson’s career started in the 1930’s until his death in 2004. This exhibit runs from April 11 through June 28. For more info, visit moma.org or read the NY Times article on Cartier-Bresson at the following link, http://s.nyt.com/u/yxK For me, I’ll probably make my yearly pilgrimage to Carnegie Deli for a corned beef sandwich on Friday night. If anybody would like to join me, email me or Tweet me, @ironmanphotog. Otherwise, I’ll see you at the prejudging on Saturday morning and the finals on Saturday night! I’m also going to have a great breakfast around 9 am at the Gee Whiz Diner on the corner of Greenwich and Warren Streets. Go to www.ironmanmagazine.com or contests.ironmanmagazine.com to view my the photos from all four championships. See ya in the City!