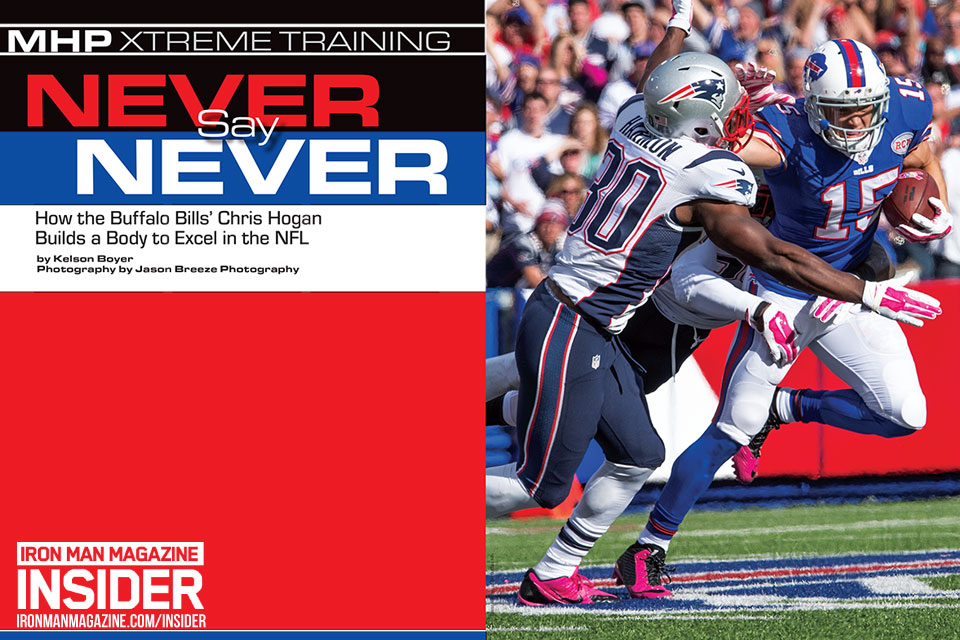 Most of us get ready for the NFL season by prepping our fantasy teams and stocking our fridges with light beer. For the athletes who actually play, it’s another story—they must push themselves to the limit in their training and practice. Granted, our goal in terms of football is to watch from the comfort of our couches as they attack each other like gladiators in the Colosseum, but we also push ourselves to the limit in our daily workouts, don’t we? When it comes to training hard, what’s the difference between them and us?

For Chris Hogan, a wide receiver for the Buffalo Bills, the difference isn’t as great as you would think. Currently enjoying a breakout season with the Bills, where he is the number-three receiver in a talented group, Hogan’s success is something he has never doubted. Even so, it wasn’t long ago that few people would have envisioned Chris ever making it in the NFL. In fact, the Ramapo, New Jersey, native’s path to the NFL was a rather circuitous one. He began his college athletic career playing Division I lacrosse at Penn State. Yes, you read that right—Hogan had played only one season of football since high school when he decided to take a shot at playing pro ball.

The change back to the gridiron wasn’t because Chris didn’t enjoy success with a stick. In fact, he was a four-year starter at midfield for the Nittany Lions and was a First Team All-ECAC selection as a senior after leading the team with 15 goals and nine assists.

After his final lacrosse season he transferred to Monmouth University to return to football. He played both offense and defense and made 12 catches, three touchdowns and three interceptions. Even so, with just one season of collegiate football on his résumé, he knew that getting noticed by NFL scouts would be easier said than done. “I have never been the type of person who likes to take time off. After the season ends I will take a few weeks to relax and let my body heal, but then I am ready to start working out hard again.”

His performance before the pro scouts belied his novice stature on the gridiron. Hogan ran a 4.47 second 40-yard dash and bench-pressed 225 pounds an impressive 28 times. Not bad for an athlete who was told at the start of his college sports career that he was far better suited for lacrosse than football.

After he signed to play on the practice squads of both the New York Giants and Miami Dolphins, Hogan knew that his dream was becoming real. It became even more real when he started getting calls from teams all over the league, including the 49ers and Colts. Still, as you can imagine, making the practice squad, receiving phone calls and just suiting on Sundays was simply not enough for Chris Hogan.

“It wasn’t my long-term goal, but making those practice squads was a good step toward it,” he recalls. “It was my way into pro football. I knew I had to take those opportunities and even take a few steps back when I was cut to keep learning and keep working toward being a wide receiver in the NFL.”

Now in his third year with the Bills, the 25-year-old is just coming into his own.