No Lights! No Camera! Just Action! 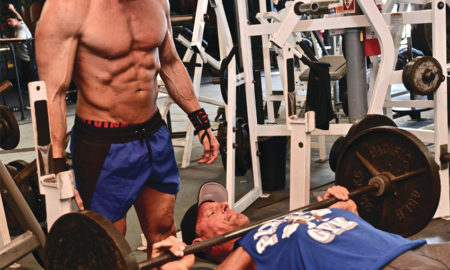 Morning Ritual To Live To 100 The gym isn’t the place to create content for your social media feed.

You in the backwards hat and LIVFIT tank top with the tripod set up filming your 225-pound deadlifts (with terrible form, I might add). You’re filming mediocrity! That’s the problem with fitness in this day and age: The damn social media storm in the gym.

Now before you go and call me a hater or even a hypocrite (since my gym is powered by social media), I’d like to begin by saying there’s a time and a place for social media. And for God’s sake, there’s an acceptable quantity. Many are simply overdoing it.

Ready For Your Close Up?

Say you want to film your top set of the day, maybe a PR or something significant, please, by all means, be my guest. But filming every single set, every single rep, usually of nothing particularly special (for example, 165-pound lat pulldowns for sets of 12), just get out! I can’t stand it.

Sometimes I think there are people who wouldn’t even be in the gym had they not fully charged their Hero 4 the night before. Newsflash: No one gives a damn about your lat pulldowns with a fisheye lens. And don’t get me started about people who film arm workouts. Filming dumbbell curls has to be the most boring content on the planet. I’d honestly rather watch Bob Ross paint a skyline on PBS. (His voice is quite soothing, isn’t it?)

Unless you are shooting for a fitness magazine or a commercial, there’s really no reason to care so much about the camera throughout your entire workout. I mean, how’s the camera going to get you in better shape? So what should you be doing rather than setting up a tripod for the perfect angle? How about some focus? And that, folks, is what we’re missing in the gym in 2017: Focus. Focus on the weights, on the reps, on the squeeze, on the pump, even on the motivation that brought you to the gym in the first place. Focus on anything but the camera and its subsequent social media outlets.

I love that today’s fitness has taken a swing back to old-school methods. There’s lots of barbell work, a huge influx in strength sports and independent hardcore gyms are in high demand. But, the difference between 1970s lifting and today is social media. Heck, no one even had the Internet back then. So no one gave a damn about filming their workouts and force-feeding it to all of their insta-buddies later that night. Instead, a community was built around the barbell. Brothers of the iron would train and grow together. Through that, a common respect and camaraderie was built.

If someone had some trash talk for another athlete, it was settled in the gym, under the squat bar. Not this Internet keyboard warrior nonsense, where the people hating couldn’t accomplish half of who they’re hating on.

What I love about the gym is that it’s a place to unplug from the regular stresses and expectations of everyday life. It’s a place of meditation, internal growth and an authentic focus on oneself. So, why bring a cell phone (which is the complete antithesis of this concept) into the gym only to film for others to watch and judge, when the purpose is to unplug and self-improve?

Trust me, no one is admiring your basic pull-up vid with a couple chains around your neck. You don’t look hardcore. And you’re certainly not special for doing it. Just stop already.

Instead of spending the 20 extra minutes fixing the camera angles or, God forbid, the extra hour editing in post-production, why not take that 80 minutes and spend it on more training? After all, that’s what this whole gym thing is about, right?

The great Greg Plitt (may he rest in peace) would thrive on working out in secret for months, in a sweatshirt and sweatpants, so no one would see any progress he was making. Then, on the day of his photo shoot, he would reveal his hard work and dedication. I always admired this tactic to shock and inspire. Call it “narcissistic discipline” if you will, but Greg knew the right time and place to show off what he had.

I think the thing to take away from this article isn’t that the owner of Metroflex LBC hates cameras and people who use them in the gym. But rather, I see so much effort and focus in something so insignificant, it boggles my mind. People come to the gym for two hours and spend 90 minutes of that time fiddling with the camera and social media (on their phones, status updates, the whole nine yards). If they actually trained, I mean really trained, their ass off for the entirety of their time in the gym, then they would see some drastic improvements.