As I’m not one of those physique reporters who covers a different show every weekend, the ones I do attend really resonate. As we gear up to head for the Olympia in Vegas next weekend, I keep thinking about the great time I had in Myrtle Beach, South Carolina, a couple of weeks ago at the NPC Stewart Fitness Championships. I’ve known “Jumpin’” Johnny Stewart, as L.T. calls him, since his Team Universe days—he won the overall twice—but it was my first opportunity to check out the shows he’s been promoting in the Carolinas. Turns out Johnny is terrific at that too. The NPC Stewart Fitness Bodybuilding Championships, in its second year, was a class act all the way and attracted a fabulous lineup, including the above roundup of overall champs (from left): Sharon Waddell, junior figure; Sabina Moise, figure; Patty Busch, women’s physique; Queenie PeBenito, bikini; Joe Powell, men’s bodybuilding; Jon Cetera, men’s physique; and Nora Justice, women’s bodybuilding. Look for bikini queen Queenie to turn some heads at the Nationals in November.

The weekend was special for me, as my buddies at BOD-Tv invited me to come along and talk Olympia with a man who owns eight Sandows, the one and only Lee Haney. It was a total-Lee awesome experience—Lee told me a few things about the guys; I passed on a few tidbits about the women. Turns out neither of us is betting against Phil Heath—or Iris Kyle.

With a big pro show in Florida—the Valenti Cup—and the Tournament of Champions Pro Figure in Southern California, I didn’t think I’d be running into many folks I knew, but it turns out plenty of old friends had come to help Johnny make the weekend special.

Deborah Dunn, another face from the Team U back in the day, who got her pro card—in her 50s—this season at that show, was doing interviews on the red carpet, while IFBB pro Tonie Thompson put on a spectacular guest-posing routine. LaDrissa Bonivel, who got her pro card in physique at the USA in 2011, came down from Chicago to hang with Tonie and her husband, Guy Ducasse, and the four of us had a nice lunch at the local Chili’s.

Later I got to hang with Haney and his lovely wife, Shirley—my first really up close encounter with a Sandow—and the after-the-show unwinding with Harry Grigsby and Lee of LHGFX Photography was fun, guys. Let’s do it again. 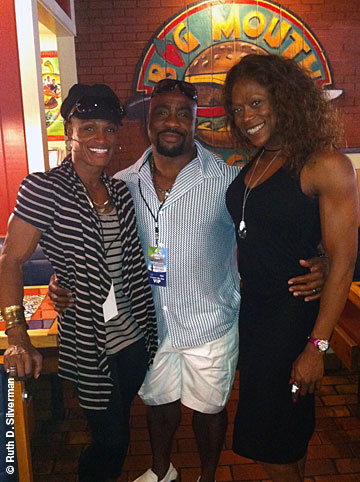 A BOD-Tv presentation of the ’12 Stewart Fitness Bodybuilding Championships is headed for the local airwaves. (The ’11 Charlotte Cup has been airing on the NBC affiliate in that city.) Very cool. Can’t wait to see it.

Thanks to Jay Hammett of BOD-Tv and to Jumpin’ Johnny for the Myrtle Beach adventure. As I said, let’s do it again.

With Lee Haney and one of his Sandows.