Oh wow oh wow oh wow oh wow. Coming back down to real life after another fabulous Arnold Sports Festival weekend was a particularly dramatic adjustment this year. Was it the freezing weather, the extended visit back east or a bug that that caused a total collapse upon return to sunny (and I mean sunny Southern California)? The weekend itself was nonstop fun, as always, and the women’s competitions brought an excellent mix of the expected and the unexpected.

Regarding the controversial results at the Ms. I (and having spoken with several members of the panel), I believe that the accompanying photo illustrates why Yaxeni Oriquen was the judges’ choice, period. History shows that when Yaxeni looks this good, she wins, and it held true in Columbus.

Still the decision was close—just two points. The panel took note of the brevity of runner-up Dayana Cadeau’s suit at the judging but did not mark her down for it, according to one source. More likely it was a note for the future. To see what the heck I’m talking about, check out photos in the Ms. International galleries. As for Iris Kyle’s controversial seventh-place finish, there was plenty of second-guessing as to whether that was the correct way for the judges to “make their statement.” In retrospect I can see the point: Give someone else a chance to finish in the money and earn a ticket to the Olympia. As it turns out, that person was Cathy LeFrancois—and who among us won’t be thrilled to see that body onstage at the big show?

The decision also made Yaxeni, not Iris, the all-time Ms. International record holder with four wins (the two had been tied at three apiece with Vickie Gates and Laura Creavalle). Iris was philosophical. “I stepped on my own toe,” she said. “I’ve been up and down and all a round, and I’m still the same person.” She just hoped that people would treat her the same.

She’s still Ms. Olympia too, but clearly, it’s going to be an interesting year. No question that the symmetrical and muscular Ms. Kyle will be looking to have an improved presentation the next time she hits the stage. 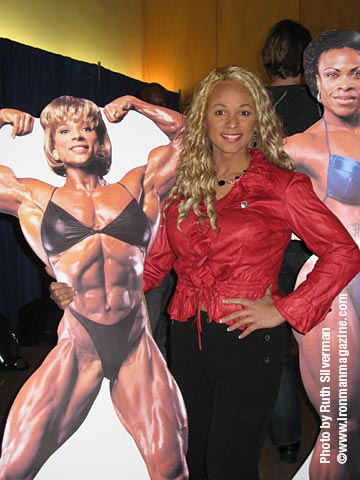 Yaxeni Oriquen hits one for the road before the start of the Ms. International finals.

Laura Creavalle, then and now.