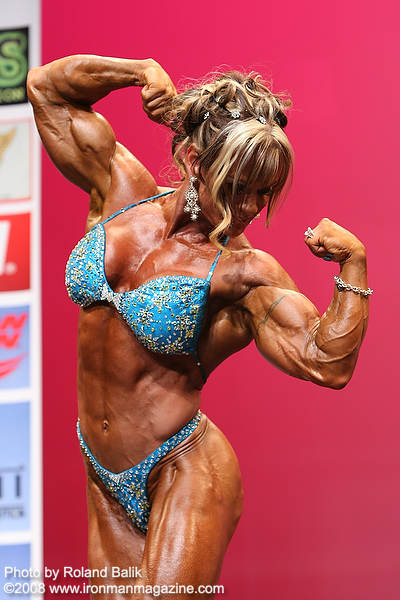 Little Cathy LeFrancois scored her very first pro win at the New York Pro Women’s Bodybuilding contest on May 10. I say “little Cathy” because so much has been made of the fact that one of the so-called smaller women bodybuilders came out on top at the event, which promoters Steve Weinberger and Bev Francis revived after a two-year absence. The ascension of the Canadian-born LeFrancois to the top of the lineup has been heralded as the arrival of a new era, in which the federation is favoring a more feminine look in its female flexers. While it’s true that the lady is but 5’2” and competes as a lightweight when weight classes are called for, I submit that the judges at the New York simply did what they always do—they picked the person they thought had the best physique onstage that day, period. I challenge you to check out IRON MAN’s gallery from the show—photos by Roland Balik—and find another competitor who had as much mass (proportionately), shape, balance and conditioning, not to mention bodypart flow, as Cathy. That said, I had to wonder if her physique wasn’t a little bigger—and harder—than the package that brought her sixth at this year’s Ms. I.

If it was, it didn’t seem to bother anyone. LeFrancois, who was the ’03 lightweight winner at the Ms. International, “brought sexy back to women’s bodybuilding,” according to one on-the-scene observer. That may be, but it’s also true that there was nobody taller and/or more massive onstage whose physique featured all those qualities.

According to the panel, it was not even close. LeFrancois earned a perfect score and finished 33 points ahead of runner-up Jeannie Paparone, with Rosemary Jennings a mere four points behind her in third. The choice of Paparone, an excellent bodybuilder who is never the biggest gal onstage, in second could also be cited as evidence of a trend—until, once again, you look at the pictures. Jeannie definitely dialed it in, and there was no one in good condition who had the size plus aesthetics to beat her. (Had Annie Rivieccio been in top shape, it would have been a different story.) Ironically, Paparone took second in the lightweights at the last New York Pro, in 2005—to Jennings, who won the overall as well. This time, though, the honor came with an Olympia invite.

That the third Olympia-qualifying slot went to Rosemary, who’s about LeFrancois’ height but has a more muscular look, should have put to rest any thoughts that the judges have gone soft on muscle. Fourth- through sixth-placers Dena Westerfield, Debi Laszewski and Rivieccio all had their good points, aesthetically speaking, but the panel wasn’t tempted. As the saying goes, No cuts, no glory.

Props also to ’07 National Middleweight champ Tina Chandler, who tied for seventh (with Debbie Bramwell) in this lineup of 19 in her pro debut.

As for the resurgence of femininism, we’ll see what happens in August at the next round women’s pro-bodybuilding battles—the Pro Bodybuilding Weekly Championships in Tampa, Florida, on August 9 and the Europa Supershow in Dallas on August 15. Why is it interesting? The Europa features weight classes while the PBW show doesn’t, and since many of the same athletes will be targeting both shows, it should be very interesting to see how they both come out. Cathy LeFrancois was a popular winner in New York—popular with the judges and the pundits.

Texan Tina Chandler got some notice in her pro debut.