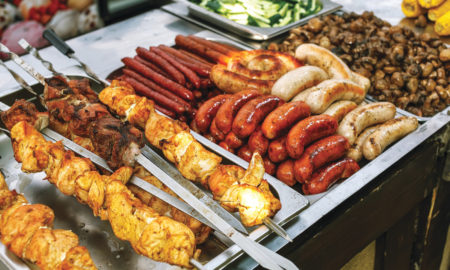 Grow With The Flow

By now you’ve probably heard of intermittent fasting. What began in the Paleo/ancestral health movement has migrated into mainstream fitness. Intermittent fasting is the practice of limiting your daily food intake to a certain window of time, typically eight hours. It seems to work wonders for the obese and insulin resistant, but a new study published in the Journal of Translational Medicine examined its effect on bodybuilders.

In the experiment, 17 bodybuilders ate how they normally would, and 17 ate only between 1:00 p.m. and 8:00 p.m. Both groups consumed about the same number of carbs, protein, fat, and overall calories. At the end of the experiment, the fasting group lost significantly more body fat and several health-related biomarkers improved. Their testosterone and IGF-1 levels went down, but they did not lose any muscle mass. Researchers conclude that intermittent fasting can be useful for losing fat or maintenance phases for anyone interested in body composition.