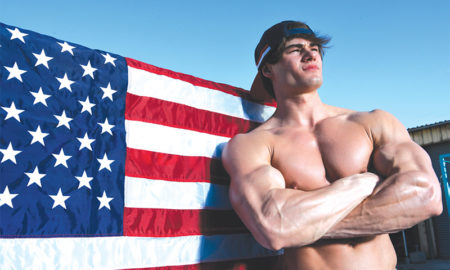 A list of the unheralded benefits associated with protein you may have never heard of.

Proteins are one of the primary building blocks of a viable and healthy diet that’s essential for building muscle, but you already knew that. Regardless, there are a lot of other reasons you should be consuming a high-protein diet. For example, a protein deficit can lead to low energy levels, poor cognitive skills, and other issues like mood swings, unstable blood sugar, and poor metabolic maintenance. Why? Protein is fundamental to maintaining our physical and mental energy.

This isn’t just another protein story. Instead, we’ll reveal some of the lesser-known research into this vital macronutrient. Here are some of the best and lesser known reasons why protein should take up more space in your diet and why it’s the single most important ingredient to building your best body.

Low-calorie diets are often paired with high protein consumption, and it makes sense – a protein-rich diet boosts the body’s metabolism. High protein-foods encourage feelings of fullness, which helps prevent overeating. A diet high in protein and low in fat and other carbohydrates helps the body maintain muscle while promoting fat loss. In order to reap these benefits, researchers at the University of Missouri Columbia recommend eating a daily protein-rich breakfast and consuming high-quality protein. But, any old protein may not do.

The Society for Endocrinology states that phenylalanine, an end-product of digested protein, has been shown in a recent study to cause weight loss. It’s thought that phenylalanine triggers hormones that cause feelings of satiety. As a result, researchers are looking to determine whether molecules such as phenylalanine can be efficiently used to prevent and treat obesity.

2.Protein Has A Beneficial Effect On Memory And Possibly Alzheimer’s

Did you forget to bring your ready-to-drink protein shake with you to the gym today? Oddly enough, your forgetfulness might be because of a decline in klotho, a protein that’s considered to have life-extending properties and typically decreases with age. With this decrease comes a decline in cognitive ability, clearly marking the importance of certain proteins.

In a study published in the Journal of Neuroscience, researchers increased the levels of klotho present in the brains of mice who had high levels of Alzheimer-related toxins. After the klotho levels were raised, the mice experienced an increase in cognitive ability and memory, despite the high levels of toxins. The researchers were pleased with the positive effects of klotho on memory and cognition, commenting on how remarkable it was that not only were they able to increase the intelligence of already healthy mice, they were able to protect the mice who were suffering from toxins in their brains.

Certain proteins have been under study for their anti-inflammatory properties. The complement system, which consists of 30 plasma proteins, is an important part of our body’s immune system. Researchers at the Medical University of Vienna are trying to determine if utilizing the properties of the complement system could help treat and prevent diseases such as psoriasis, rheumatoid arthritis, as well as organ rejection.

In terms of anti-inflammatory properties, remember that some high-protein foods, such as dairy and red meat, are not necessarily recommended for an anti-inflammatory diet. Rather, better options include lean meat, plant-based proteins, and fish high in omega-3 fatty acids. Exercise causes a breakdown and rebuilding of muscles, for which protein is an important component. Researchers at the American Society for Nutrition found that consuming high-protein beverages during and immediately after exercise stimulated muscle growth and muscle protein synthesis.

For those who are concerned with muscle building or even toning, consuming high-protein drinks or meals can really make a difference, even in the eyes of science. Your bro and his science were right after all!

According to a study published in the journal, Circulation, protein might be another molecule to consider adding to the hypertension-healing toolkit. One study found that while consuming high levels of protein did not have a significant effect on diastolic (bottom number) blood pressure, protein consumption did have an effect on systolic (top number) blood pressure, lowering it by approximately 2 mmHg.

The number may not seem like much, but the American College of Cardiology stated that, “this change could mean the difference between maintaining a healthy systolic blood pressure level and having high blood pressure.”

6. Protein Could Help Your Bones

Whey protein is important to anyone who knows anything about working out. It helps fuel muscle gains and is the backbone of many muscle-building diets. But it isn’t just an agent for growing your guns.

In fact, researchers at the University of Illinois at Urbana-Champaign, found that a diet rich in whey protein could also help protect your bone density and accelerate fat loss. If you need more reasons than that to start consuming it, then you don’t deserve all these benefits!

7. A High-Protein Weight-Loss Diet May Contribute To Better Sleep

Is your significant other facing an uphill battle to lose weight? Are they grumpy and not sleeping well? If so, they may want to shift to a higher-protein diet.

In a study from Purdue University, people who lost weight with a low-calorie, high-protein diet had better quality sleep when compared to individuals who lost the same amount of weight with a diet where they consumed a normal level of protein. Individuals on the higher-protein diet reported this improved sleep quality after approximately four months of weight loss.

One of the greatest blockers to a healthy lifestyle is an inability to curb food cravings. Unfortunately, these cravings often get worse at night. Increasing protein by 11 percent of your overall energy consumption, however, was shown in one study published in the journal, Obesity, to reduce the cravings for nighttime snacking by about half. Needless to say, that’s a pretty incredible difference.

One theory is that consuming protein may impact dopamine function in a positive way, reducing cravings. Eating a protein-rich breakfast is just one way to set yourself up for less cravings at night.

9. Protein Has A High Thermic Effect

Consuming foods with a high thermic effect is one great way to boost your metabolism. Some foods have a higher thermic effect than others, and protein has one of the highest at approximately 20 to 35 percent. To put this in perspective, fat and carbohydrates have a thermic effect of up to only 15 percent.

In other words, consuming protein literally causes your body to burn more calories. On its own, this fact means little in the way of weight loss, but when considered in the scheme of a healthy diet and lifestyle, taking into account the thermic effect of food can be of great benefit.

By helping reduce cravings, having a high thermic effect, and causing quicker feelings of fullness, a protein-rich diet could be an important tool in keeping off weight that you’ve tried so hard to lose.

A high-protein diet isn’t a healthy option for everyone. With that said, it’s been suggested by research published in the International Journal of Obesity that making a change to a high-protein diet – or at least increasing your protein intake – could help you keep weight off by a whopping 50 percent better than if you stuck to a lower-protein diet.

Maintaining a protein-rich diet can be difficult as you age. This is very unfortunate as muscle mass and bone density naturally decline as you get older. These declines can have a very real impact on your quality of life, making it more difficult to get around, be independent, and live a generally healthy life.

A University of Texas study suggests that older bodies have just as much of a chance of turning protein-rich food into muscle. It’s important for older individuals to maintain proper protein intake to prevent the deterioration of muscle mass and other bodily functions. The earlier this habit is started, the better.

So, what’s the gist on protein? As always, before drastically changing your diet, consider weighing your options with your doctor and see if a high-protein diet is healthy or recommended for you. With that said, research suggests that consuming higher amounts of protein may improve cognitive abilities, prevent weight gain, induce protein synthesis, and even reduce inflammation. We all knew that protein was a big part of a muscle-building diet, but little did we know just how many more ways our body could be affected.

12. Protein Consumption Can Play A Role In Our Mental Health

Did you know that many of the neurotransmitters in our brains are made up of amino acids? It’s true. Dopamine, a neurotransmitter associated with arousal, motor control, and other psychological and physical functions, is formed by the amino acid tyrosine. Foods high in tyrosine include cheese, chicken, eggs, and beans, all of which are good sources of protein.

The amino acid tryptophan is the key in making serotonin, which, when in deficit, could lead to depression. Although there are pharmacological methods of maintaining serotonin levels in the brain, one natural technique is to consume foods high in tryptophan, including chickpeas and the previously mentioned list of high-protein foods.