Letting The Fat Out Of The Bag 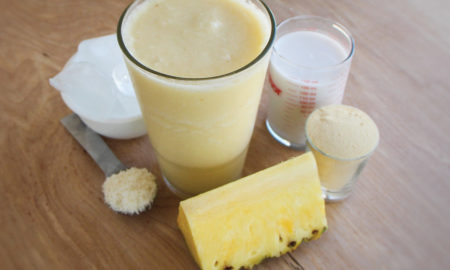 The right kind of fatty acids can help you fight age-related damage.

By Brett A. Osborn, DO, FAANS, CSCS, and Jay Campbell

Do you often find yourself reminiscing about those good old days of your 20s and 30s? Everyone does this—not because of the “grass is always greener” phenomenon, but because there is hard truth to the matter when it comes to your physical prowess. You had your mojo, your strength was peaking, PRs were routinely shattered in the gym, and you could train four to five times per week without incident. But then life got in the way, literally. And we’re not talking about financial burdens, kids, or intolerable in-laws. We’re talking about that dreaded disease by which, according to actuarial data, we are all afflicted come age 25: aging. Age-related diseases such as cancer, diabetes, and Alzheimer’s disease are on the rise. Very few people continue to excel as they float down the ethereal river of time. In fact, quite the opposite occurs. Remember, aging is the accumulation of damage resulting in disease, not as was previously thought, the accumulation of disease resulting in death. Now read that last sentence again. By simply existing on this earth (for all the Thoreau fans out there), you are being bombarded not only by UV rays, but also by metabolic by-products of cellular metabolism. Their effects are the same. Be they high-frequency photons or free radicals, they both induce cumulative damage as the sand falls through the hourglass. Sure, you can steer clear of Venice Beach and the handheld sun reflectors of the ’80s, but you can’t block bodily production of free radicals. However, there is hope. You can age gracefully with maximal muscle and a lean body long into your later years. In addition to optimizing your hormones, modifying your training to include more strength and flexibility work, and mandating six to eight hours of sleep nightly, you must also pay particular attention to your diet, especially the type of fat being consumed (the amount will be dictated by your current training goal).

Fats are critical to a whole host of metabolic processes:

Fats are classified by their structure. Unsaturated fats contain “double bonds” between carbon molecules. These are the essential fatty acids (EFAs) that must be consumed in your diet. Think of them as the anti-inflammatory or “good” fats. They are oils at room temperature. Omega-3s fall into this category. Saturated fats contain single bonds between carbons. Saturated fats have been linked to cardiovascular disease and are typically (but not always) the “bad” fats. Trans fats of recent media infamy fall under this heading. These fats are solid at room temperature. Crisco, anyone? A 2011 study in the American Society for Nutrition reported that when a group of 16 healthy older adults were given either corn oil or omega-3 fatty acids for eight weeks, the omega-3 cohort noted increases in muscle mass. Accordingly, the study authors advocate the consumption of omega-3s for the prevention and treatment of age-related loss of muscle (an independent risk factor for all-cause mortality in adults). Good fat doesn’t make you fat. In fact, just the opposite is true!

While omega-9 fatty acids are non-essential because the body can manufacture them from the ingestion of sugar and starches, the ingestion of omega-6 fatty acids have a major impact on health and vitality. Since they are inflammatory in nature, omega-6s are critical to your body’s defense against offending pathogens. Without them, you’d stand no chance against the flu virus, nor would you be able to recover from a brutal training session. By no means does that give you license to gobble up McDonald’s French fries, which are cooked using industrial vegetable oils and thus laden in omega-6 fatty acids. The greatest sources of omega-6 fatty acids are canola oil, safflower oil, sunflower oil, corn oil, and soybean oil, which are very inexpensive, so they are commonly used in commercial junk foods. Unsurprisingly, Americans eat too much omega-6 relative to omega-3 fatty acids. In fact,  a 20-to-1 (omega-6-to-omega-3) ratio is common. Compare this to the 4-to-1 ratio of the Japanese, who rank second on the world’s life expectancy list. It’s no wonder we are stricken at an early age with joint pains and other manifestations of bodily inflammation.

Is this you? Do you find yourself reaching for the Advil or Aleve bottle on a daily basis and find yourself unable to train due to pain? And what about your skin health? Is your psoriasis flaring up? Don’t blame your genes. They’re simply responding to the distasteful, disease-causing signals you’re sending them by eating poorly—excessive amounts of refined carbohydrates found in the American diet sinisterly compounded by an improper ratio of omega-3-to-omega-6 fatty acids. Now you see why McDonald’s French fries are truly the perfect storm. On the flip side, foods like coldwater fish, which provide protein and high quantities of omega-3 fatty acids, are your breath of fresh air as the sun rises over the Pacific. Yes, nutrition is likely the most important factor in your health. You get out of your body what you put into it, literally. And the optimal amounts of dietary fats are a critical component of the recipe. Err on the side of overconsumption of the good fats rather than the bad—the omega-3s rather than the 6s. Make the mistake that hurts you the least, in essence. And while we need both types of essential fatty acids to survive, it is likely you are getting surplus amounts of pro-inflammatory omega-6s from the American diet and bellowing the smoldering flames of inflammation. So fight the good fight and supplement aggressively with omega-3 and omega-9 fatty acids. After all, humans at base level are machines, evolved and highly complex, albeit machines just like your car. Does it strike you as odd that the best way to assure your car’s longevity and performance is to have its oil changed every 5,000 miles?  IM